We congratulate our winners!

Thank you to everyone that took the time to enter the competition.

Our Major Prize winner was Gavin Tasker from IANZ who had the closest guess and attended one of our Roadshow events with a guess of 75.55555 m.

The Minor Prize winner is JoAnn Eggers who had the closest guess with 76.910169 m.

For the result of Julia's 1 kilogram throw click here to watch part two. Any science competition must have some statistical analysis in it along the way, and this one is no different, so our scientists have analysed the results. People were given the value for how far Julia could throw the 4 kg weight. (62.78 m) and then asked to guess how far she could throw a 1 kg weight. Only one person thought the 1 kg wouldn't go as far as the 4 kg. There were some wild guesses (500 m). Most guesses were within 15 m (20 %) of the actual value (77.29 m). 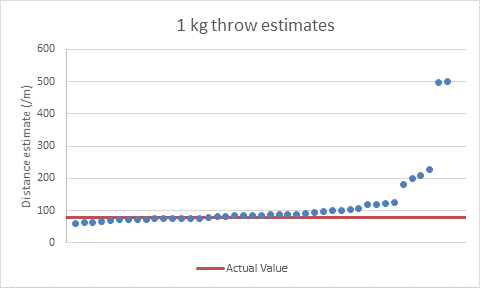 To put all this into context we have mapped Julia's Personal Bests with each weight compared to the 1 kg mass standard. So what was this competition about? New Zealand’s primary kilogram was not actually used in the production of this video and sits safe and sound in a vault at the Measurement Standards Laboratory. No scientists’ brains were used in the production of any measurement uncertainty budgets for the results obtained during the promotional stunt. These results should not be relied upon for anything other than the purpose for which they were obtained.